We have a range of equipment and expertise to allow us to complete heavy metals and impurities testing, including trace metals.

We are equipped with ICP-OES which is a trace-level, elemental analysis technique that uses the emission spectra of a sample to identify and quantify the elements present. This allows us to analyse for a range of metals at once.

Our industry experts, including our PhD level chemists can support your projects however complex.

Elemental impurities in the products may arise from several sources; they may be residual catalysts that were added intentionally in synthesis or may be present as impurities (e.g., through interactions with processing equipment or container/closure systems or by being present in components of the drug product). Elemental impurities should be controlled within acceptable limits. Permitted Daily Exposure (PDE) established in the guidelines are considered to be protective of public health for all populations. 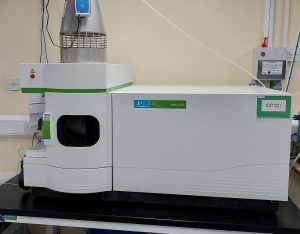 Heavy metals are defined as metallic elements that have a relatively high density compared to water . Heavy metals like Chromium (Cr), Cadmium (Cd), Mercury (Hg), Lead (Pb), Nickel (Ni), and Thallium (Tl) are potentially hazardous in combined or elemental forms. Heavy metals are highly soluble in the aquatic environments and therefore they can be absorbed easily by living organisms. Previous studies have detected heavy metals in the gills, liver, and muscles tissues of various species of fish in contaminated marine ecosystems. Once the heavy metals enter the food chain, they may end up accumulating in the human body. Since most heavy metals are widely applied in industries, exposure and contamination of the workers and residents near such facilities is likely to occur. Heavy metals above allowable limits will often lead to disadvantageous effects in humans, other organisms and the environment at large. Allowable safe limits of heavy metals in food samples are associated with low health risks in humans.

The level of toxicity of some selected metals for humans follows the sequence Co < Al < Cr < Pb < Ni < Zn < Cu < Cd < Hg. The harmful effects of heavy metals in humans depends on their dosage, rate of emission and period of exposure. Some of the heavy metals that have received more attention for the last decades are Hg, Cd, and Pb. The WHO recommended safe limits of Hg in wastewater and soils for agriculture are 0.0019 and 0.05 ppm respectively10.

Chronic toxicity of Cd in children includes damages of respiratory, renal, skeletal and cardiovascular systems as well as development of cancers of the lungs, kidneys, prostate and stomach.

Exposure to Pb can occur through inhalation of contaminated dust particles and aerosols or by ingesting contaminated food and water. Lead poisoning in humans damages the kidneys, liver, heart, brain, skeleton and the nervous system.

Chromium is widely used in metallurgy, electroplating, and in the manufacturing of paints, pigments, preservatives, pulp and papers among others. The introduction of Chromium into the environment is often through sewage and fertilizers.

Thallium is a soft, tasteless, odourless white blue metal in its pure form and it oxidizes to thallium oxide when exposed to air. Sources of Tl include electronics, optical glasses, semi-conductors, mercury lamp among others. Humans become exposed to Tl through ingestion, inhalation and dermal exposure.

Nickel is a silver – coloured metal used in making stainless steel, electronics, and coins among other uses. Globally, the release of Ni to the environment is estimated to vary from 150, 000 to 180, 000 metric tons per year. Exposure of Ni to humans is through food, air and water.

Wastewater from factories may contain heavy metals which with time accumulate in the soil deposits along waste water channels as well as in organisms that inhabit such channels. Exposure of humans to contaminated wastewater is often possible especially in urban highly populated areas or where the wastewater is reused for agricultural activities.

We have had recent success with complex metal impurities from silver, silver oxides to traces of arsenic and lead.

We have worked with a number of metals and would be happy to discuss your requirements, please contact us for a tailored quotation.

Details of our work with Agrochemicals

Details of our work with Biocides & Disinfectants

Details of our work with Storage Stability

Details of our work with 5 Batch Analysis and Impurity Profiling

Details of our work with Method Development & Validation

Details of our work with Physical & Chemical Testing

Details of our work with Routine Quality Check Analysis (QC)

We use cookies on our website to give you the most relevant experience by remembering your preferences and repeat visits. By clicking “Accept”, you consent to the use of ALL the cookies.
Cookie settingsACCEPT
Manage consent

This website uses cookies to improve your experience while you navigate through the website. Out of these, the cookies that are categorized as necessary are stored on your browser as they are essential for the working of basic functionalities of the website. We also use third-party cookies that help us analyze and understand how you use this website. These cookies will be stored in your browser only with your consent. You also have the option to opt-out of these cookies. But opting out of some of these cookies may affect your browsing experience.
Necessary Always Enabled
Necessary cookies are absolutely essential for the website to function properly. These cookies ensure basic functionalities and security features of the website, anonymously.
Functional
Functional cookies help to perform certain functionalities like sharing the content of the website on social media platforms, collect feedbacks, and other third-party features.
Performance
Performance cookies are used to understand and analyze the key performance indexes of the website which helps in delivering a better user experience for the visitors.
Analytics
Analytical cookies are used to understand how visitors interact with the website. These cookies help provide information on metrics the number of visitors, bounce rate, traffic source, etc.
Advertisement
Advertisement cookies are used to provide visitors with relevant ads and marketing campaigns. These cookies track visitors across websites and collect information to provide customized ads.
Others
Other uncategorized cookies are those that are being analyzed and have not been classified into a category as yet.
SAVE & ACCEPT